A little while ago I introduced you to my rescue horse 'Prince'. But if you missed it, Prince is a 7 year old Thoroughbred, who was given to me in a very poor state back in January.

As with any neglected and skinny horse, I was taking a risk in taking him on! You never quite know how much damage has been done and whether they will improve or not.

And honestly - there is still every chance that Prince may have further issues down the track.

But right now, the turnaround has been quite impressive!

In fact - he's looking pretty darn good, considering where he was a few months back.

Not only is he a much better weight (although clearly still more to go!), but he is so much happier and more relaxed and has even dropped several of his very peculiar anxious paddock habits (he originally couldn't handle it if I fed him in a different spot to normal and when stressed, would reverse into and stand in his feed buckets!).

As of this week - he is also now sharing a paddock with my other young Thoroughbred, Trigger - and he is learning to be a normal, happy horse again!

Funnily enough, despite the fact that Trigger can be fairly dominant and aggressive and full on, he and Prince are getting on rather well together. Hooray!

Here's some photos that I took just yesterday: 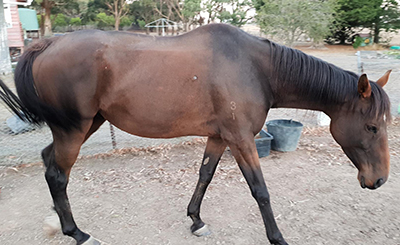 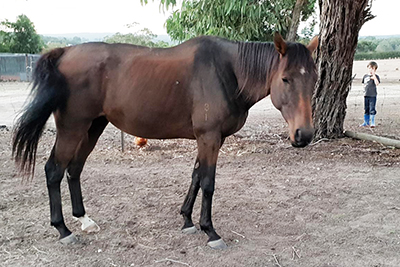 Here is where he was at when I introduced him, probably 6 weeks ago now: 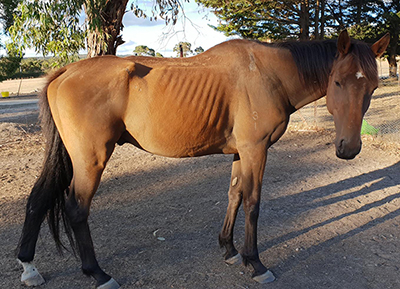 And this was the poor baby when he first arrived: 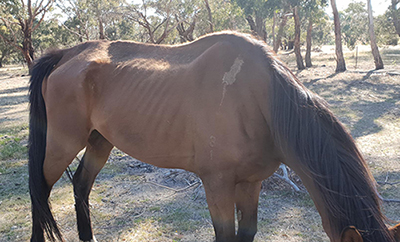 As you can see - he has come a very long way! His coat and skin is looking so much healthier, and he is even going darker now with his winter coat starting to come through :)

We've started some basic groundwork in the last few weeks - and just waiting for a bit more weight and topline before we tackle a saddle or riding.

But right now, things are looking promising. I'd love to be able to turn him into a nice, steady all-rounder as he has such a lovely nature.

Yet I'm still being cautious and trying not to get too excited! Whilst everything is looking good, we really have no clue as to what he'll be like under saddle and health issues may crop up at any time.

But watching him happily trotting around the paddock with enthusiasm after Trigger - is enough reward for me :)

The next month or two will begin to reveal his future potential - so keep your fingers crossed for us! I'll be sure to let you know!