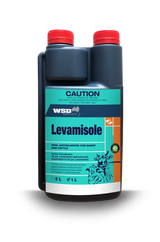 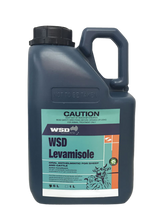 It is effective for the control of levamisole sensitive gastrointestinal roundworms and lungworms including those that are resistant to benzimidazoles.

A broad spectrum treatment for roundworm parasites of sheep and cattle. Type of Preparation WSD LEVAMISOLE is a solution for oral use as a drench containing 27.5g/L levamisole- an imidazothiazole compound. It is commonly known as a ‘clear drench’. Indications Cattle, Sheep, Lambs and Goats:

• WSD LEVAMISOLE is a reliable broad-spectrum oral drench for cattle of all ages.

• It is often best administered to adult cattle with a drenching hook. Sheep:

• WSD LEVAMISOLE is a broad-spectrum treatment which is highly effective against mature and immature worms of susceptible strains of sheep parasites.

• It is highly effective against and can be used to treat infestations by barbers pole worm (Haemonchus contortus) and thin-necked intestinal worm (Nematodirus spp).

• The use of WSD Levamisole may be indicated in strategic programs to reduce contamination of pastures when testing has shown it to be effective against other local worm parasites. It is advisable to test efficacy before relying on levamisole as a strategic treatment.

• Adult worms of resistant strains of gastrointestinal worm parasites of sheep may not be removed by treatment and this may require the later use of an effective strategic treatment from the WSD range of drenches.

• Levamisole is not effective against tapeworms. • Resistance to levamisole is widespread among some species of gastrointestinal parasites on Australian sheep farms.

• The repeated use of any drench is likely to result in the emergence of resistance and therefore, regular testing for efficacy is recommended.

Be the first to review this product.

Ausmectin Pour On For Cattle 5L

$250.00
Ausmectin Cattle Pour-On is for the control and treatment of ivermectin sensitive internal and external parasites of cattle.AUSMECTIN CATTLE POUR-ON is a ready-to-use solution of ivermectin, a member...
Add to Basket
Add to Basket
International Animal Health

$69.95 - $250.00
Active Constituents 0.8g/L Ivermectin Features Ewes may be treated at any stage of pregnancy Safe for sheep of all ages For the treatment & control of lung worm itch mite all...